THE LADDER DANCE AT OLD SHUNG-OPOVI

he present Hopi pueblo of Shung-opovi has occupied its present site since about 1700. Previous to that time, the pueblo straggled over the foothills at the mesa base. About a hundred yards west of this pueblo, over a sharp ridge, lay the old walled-in spring called Shungopa, the spring that gave the name to the pueblo, and which went dry in the 1870’s at the time of a landslide which caused a local earthquake.

About a hundred yards south of this spring stands a large boulder (Fig 1.) On the top of this boulder can be observed three holes in a row, each hole being about a foot in diameter and between a foot and two feet deep (Fig 2). Hopi tradition associates these holes with a Hopi ceremony now extinct call the Ladder Dance.

THERE WAS one kiva at old Shung-opovi known as the Ash Pile Kiva. They knew but one dance and that was called the Coal Kachina dance. This kiva was composed of not well-to-do people. Not having many costumes, all they had to wear for kilts were old dresses discarded by the women. The men in the kiva gave the Coal Kachina dance so often that it grew monotonous to see those Coal Kachinas. So one day they made an announcement that they would give another kind of dance in four days. The men in the other kivas said that only some more Coal Kachinas would come into the kiva. About a day after the announcement was made, the boys went out hunting. While they were out, one of the boys got away from the party, and, as he was going around, he jumped a rabbit out of a bush and he chased after it. The rabbit just kept going westward and the boy just kept following it. Well, the rabbit finally got into one of the shrines above Burro Springs, and the rabbit went around back of the shrine and the boy thought the rabbit was all in and tired and ready to lay down. When he got around the shrine he saw a kiva. When he looked in he asked if the rabbit had gone in there. The men who were there said “Yes,” and they asked the boy to come in.

When he got in there, they sat him down beside the fireplace and gave him a welcome smoke. When he finished that they told him they had sent the rabbit out to get him and bring him there because they were rather sorry that the men in the other kivas made fun of the Ash Pile Kiva. Then they told him they would like to have two or three of the boys go over to the San Francisco Peaks. There they would show them different kinds of Kachina 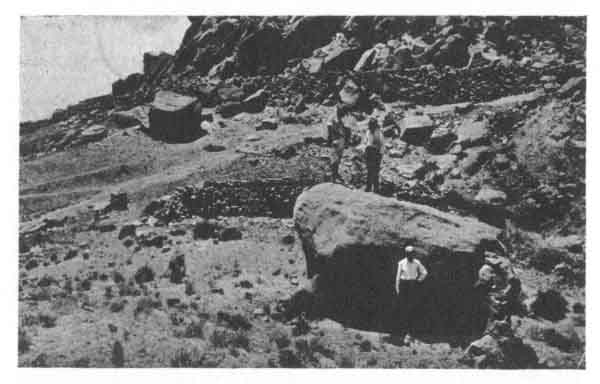 dances from which they could choose which of the dances they would have in their kiva. So they asked the boy to go right back home and tell the rest of the men of his kiva.

When he came home he went right into the kiva. Well, he told these men what he had seen at the shrine and what news he had been told. He asked the old men to make some prayer offerings which they would take over to the San Francisco Peaks to the main Kachina Kiva and said this must be kept secret from the other people who would be expecting to see the Coal Kachina dance again. They stayed up late to make their prayer offerings so that the boys could start out early for the San Francisco Peaks before the rest of the village woke up. So they came to the foot of the main peaks that day. The next morning about dawn they started to climb and at sunrise reached the kiva. When they got there they were asked to come in, and there they found the same men that the boy saw at the shrine at Burro Springs. So, as usual, they were given their welcome smoke. The men said that they would show them different kinds of dances without losing much time for there was now little time before the dance at Shung-opovi.

So they danced many dances for them and the boys liked the ladder dance very much. Well, the men at the kiva said the dance was difficult because the dancers had to climb a limber young Douglas fir tree. Finally the boys decided to ask these people if they could not do it for them. The people agreed to do the ladder dance themselves because it would be so difficult for the people at Shung-opovi. 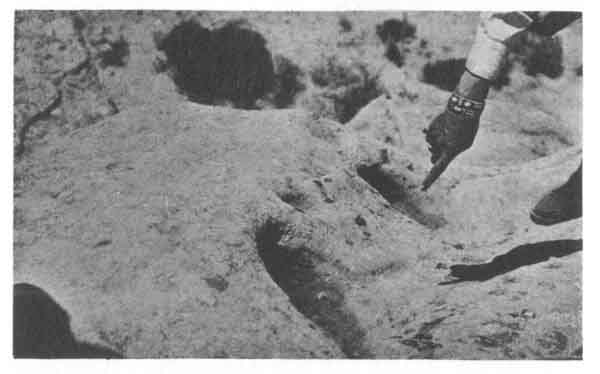 So when they did agree to do this they sent the boys back, but they asked them to take back home with them two young Douglas firs each about a foot high. They told them that when they got home, they were to find a rock on which to plant these two trees. When they got home with the two firs they brought them into the kiva and the men in the kiva performed a ceremony of welcoming the firs and the boys by smoking.

The next morning the boys took the two trees and went up to the rock which they thought would be best to plant the trees on. That morning the whole village noticed the two trees on top of the rock and wondered what was going to happen. One by one they went to look. There was an old man up there on watch so that no one could hurt the trees. Everyone who went asked him what they were for but he told them not to be too anxious until night came.

That day towards evening the Kachinas began to come out of the kivas. They kind of paraded around the village. At that time the men from the Ash Pile Kiva came out all wrapped up in their blankets. These men went out to meet the real Kachinas who came from the San Francisco Mountains. By that time it was clouding up. These men met the Kachinas at the place called Lonatchi, a spring which lies about a mile west of Old Shung-opovi. When they met them, the Kachinas told the men they must hide out that night so that he people would believe that they were putting on the dance. So they decided they would stay there and the Kachinas would go to the village and the men could follow after dark.

This old man at the rock under the two fir trees would sprinkle cornmeal on the trees and they would grow about an inch or two, and by that time the Kachinas got there they were quite tall trees. In this ceremony each Kachina was in a different costume, except that the two who were to climb the trees were dressed alike. When the people saw the Kachinas on the hill around the rock, they all ran up there. They carefully observed the performance. They were trying to figure out who the Kachinas were. They resembled men in the different kivas. The two Kachinas climbed the trees. The trees were so slender that the Kachinas swayed back and forth. They climbed while the rest sung around. It seemed as if the two trees had a spirit as the two Kachinas swung back and forth. The song that the Kachinas sung, the people of Shung-opovi still sing.

Well, after this performance they went to the village. They paraded around and entered the kiva. Then rain came down. The rest of the kivas felt jealous. Every once in awhile they would send up a man to peep in to see if it were true that the men in this kiva were putting on the dance. About midnight the dance started. All the Kachinas from the other kivas were out. But the men from the other kivas did not dance. They just put away their costumes and followed the new Kachinas around. And then by that time the men who were supposed to put on the dance came in. They watched the dance too and were not recognized.

After the dance was over the Kachinas went back into the kiva. They were supposed to go down the Sipapu and go home that way. So the next day after the dance this kiva was given praise because they had put on a great dance, different from anything that had ever been seen. From that day this kiva was recognized because of this dance, whereas, before they had never been recognized by the people of the village. From then on the people at Shung-opovi held this kind of a dance every four years until the town was abandoned (between 1680 and 1700).