Come, and let us join ourselves to the Lord in a perpetual covenant that shall not be forgotten.

Daniel 9:25 – Know therefore and understand, that from the going forth of the commandment to restore and to build Jerusalem unto the Messiah the Prince shall be seven weeks, and threescore and two weeks: the street shall be built again, and the wall, even in troublous times.

On Nov. 29, 1947, the United Nations General Assembly passed a resolution calling for Palestine to be partitioned between Arabs and Jews, allowing for the formation of the Jewish state of Israel.  This is the starting point for Daniel’s timeline.

The second to last day of the 1995 Jewish Calendar Sabbath year (Elul 28th 5755) was September 23, 1995.  It was General women’s conference where the Proclamation on the Family was read for the first time.

I consider this a warning.  It came at the *very* end of the Sabbath year.  Seven days before the next Sabbath year began on September 28, 2001, terrorists attacked the US (9/11) resulting in the deaths of thousands of people. 2nd warning.

Last day of the year before the NEXT Sabbath year was Elul 29, 2008 the Dow Jones dropped 777 points.  Third warning, with an undeniable message in the 7s.

There was a sudden influx in church attendance after 9/11 but it didn’t last.

Daniel 9:26 And after threescore and two weeks shall Messiah be cut off, but not for himself: and the people of the prince that shall come shall destroy the city and the sanctuary; and the end thereof shall be with a flood, and unto the end of the war desolations are determined.

Barack Obama was elected that year.

The statistical chances of this sequence of numbers (6667779) falling on the very night after Obama’s election in his home state is 1 in 3,650,000,000 (a statistical impossibility). This number sequence is exactly 7 numbers (the Biblical number of ‘completion’)

His claimed income on the tax return for the first year he was in office, 2009.

There are seven numbers and if you combine the 5 and 1 you get six 6’s.

I’m sure you get the numerical connection; sign of the beast.

11 And from the time that the daily sacrifice shall be taken away, and the abomination that maketh desolate set up, there shall be a thousand two hundred and ninety days.

On August 2, 2013 Obama was at the Freedom Tower to sign the uppermost and final beam.

He wrote, we remember.  We rebuild.  We come back stronger.

If you are familiar with Johnathan Cahn, this statement will be immediately obvious and connected to the harbingers.

When Israel said this they had just had a ‘small’ enemy invasion.  It was the shot across the bow that was supposed to wake Israel up and make them repent.  Instead, they said we’ll rebuild bigger and better.  They were later destroyed completely and carried off into captivity.  Our shot across the bow was 9/11.  Our captivity is coming.

And he shall confirm the covenant with many for one week: and in the midst of the week he shall cause the sacrifice and the oblation to cease, and for the overspreading of abominations he shall make it desolate, even until the consummation, and that determined shall be poured upon the desolate.

Week = sabbath week, where every 7th year is the sabbath,

But in the seventh year shall be a sabbath of rest unto the land, a sabbath for the Lord: thou shalt neither sow thy field, nor prune thy vineyard.

Midst of the week

Obama entered into a Covenant of Peace in 2009 with his Nobel Peace Prize.  It’s normally given to people who have already done something extraordinary. This time given for what he was anticipated to do.

Obama  was in Israel entering Jerusalem on 22 March 2013 or 10 Nissan on the Jewish calendar, which was the same day of the triumphal entry of Jesus Christ. Christ rode in a young donkey.  The president came riding on the back of the proverbial donkey, the Democratic Party.

“…he shall cause the sacrifice and the oblation to cease”

Obamas visit canceled the Passover sacrifice.  It was banned two days before and even though it was carried out on the Mount of Olives, it was the final sacrifice.  Every subsequent year people are arrested who attempt to perform the sacrifice.

When ye therefore shall see the abomination of desolation, spoken of by Daniel the prophet, stand in the holy place, (whoso readeth, let him understand:)

Focus on the word “stand” as opposed to kneeling.

Obama stood in the Church of the Nativity next to a man who had played a major role in desecrating the church only a few years earlier.  The earlier desecration involved using scripture pages and hymnals for toilet paper.  Universally people who come into the church kneel.  He did not.

To put this into context, let me go over the Hebrew calendar in conjunction with Daniel’s timeline.

Daniel 9:25 Know therefore and understand, that from the going forth of the commandment to restore and to build Jerusalem unto the Messiah the Prince shall be seven weeks, and threescore and two weeks: the street shall be built again, and the wall, even in troublous times.

The word weeks was translated from the Hebrew word Shabuwa meaning a period of Seven and also Feast of Weeks, one of the seven Feasts of the Lord.  The seventy weeks means seventy Feasts of Weeks, which happens once every year.  So the seventy weeks is actually 70 years.

Daniel 9:24 Seventy weeks are determined upon thy people and upon thy holy city, to finish the transgression, and to make an end of sins, and to make reconciliation for iniquity, and to bring in everlasting righteousness, and to seal up the vision and prophecy, and to anoint the most Holy.

Anointing the most Holy is where Christ is anointed at the

March 20, 2013 Important head of state visit to Israel.  Passover sacrifice canceled.  At the last minute worshipers were able to get a court order allowing it a final time.

This simulation took place in Des Moines Iowa on January 19, 2009, one day before the inauguration.  While onlookers waived palm branches, a motorcade consisiting of 4 black SUVs, the sculpture affixed to a donkey, and secret service agents made the the mile long triumphal entry which ended at the steps of the State of Iowa Capitol building.  It mocked Jesus’ triumphal entry into Jerusalem 5 days before Passover.

March 21, 2013, 6 days before Passover, Obama entered Jerusalem on the back of a metaphorical donkey;  the Democratic party.  Nissan 10 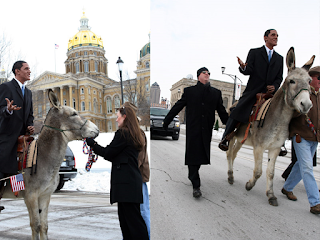 Daniel 9:27 “And he shall confirm the covenant with many for one week: and in the midst of the week he shall cause the sacrifice and the oblation to cease, and for the overspreading of abominations he shall make it desolate, even until the consummation, and that determined shall be poured upon the desolate.”

Also, Sukkot is a type and shadow of a great gathering of the righteous at Adam-ondi-ahman in the Last Days before the second coming of Jesus Christ.

Sukkot, The Feast of Tabernacles in the Jubilee year was on September 27, 2015, which was also the day of the final tetrad blood moon.

The next week we had General Conference on October 3rd and 4th.

11 And from the time that the daily sacrifice shall be taken away, and the abomination that maketh desolate set up, there shall be a thousand two hundred and ninety days.

12 Blessed is he that waiteth, and cometh to the thousand three hundred and five and thirty days.

Revelation  12:6 And the woman fled into the wilderness, where she hath a place prepared of God, that they should feed her there a thousand two hundred and threescore days.