Vishnu Washes and Anoints His Friend

The learned brāhmaṇa (Sudama), joined by some local brāhmaṇas*, passed three guard stations and went through three gateways, and then he walked by the homes of Lord Kṛṣṇa’s faithful devotees, the Andhakas and Vṛṣṇis, which ordinarily no one could do. He then entered one of the opulent palaces belonging to Lord Hari’s sixteen thousand queens, and when he did so he felt as if he were attaining the bliss of liberation.

At that time Lord Acyuta was seated on His consort’s bed. Spotting the brāhmaṇa at some distance, the Lord immediately stood up, went forward to meet him and with great pleasure embraced him.

The lotus-eyed Supreme Lord felt intense ecstasy upon touching the body of His dear friend, the wise brāhmaṇa, and thus He shed tears of love.

Lord Kṛṣṇa seated His friend Sudāmā upon the bed. Then the Lord, who purifies the whole world, personally offered him various tokens of respect and washed his feet, O King, after which He sprinkled the water on His own head. He anointed him with divinely fragrant sandalwood, aguru and kuṅkuma pastes and happily worshiped him with aromatic incense and arrays of lamps. After finally offering him betel nut and the gift of a cow, He welcomed him with pleasing words.

*brāhmaṇas: people entrusted with the duty of preserving the intellectual and spiritual culture of the society 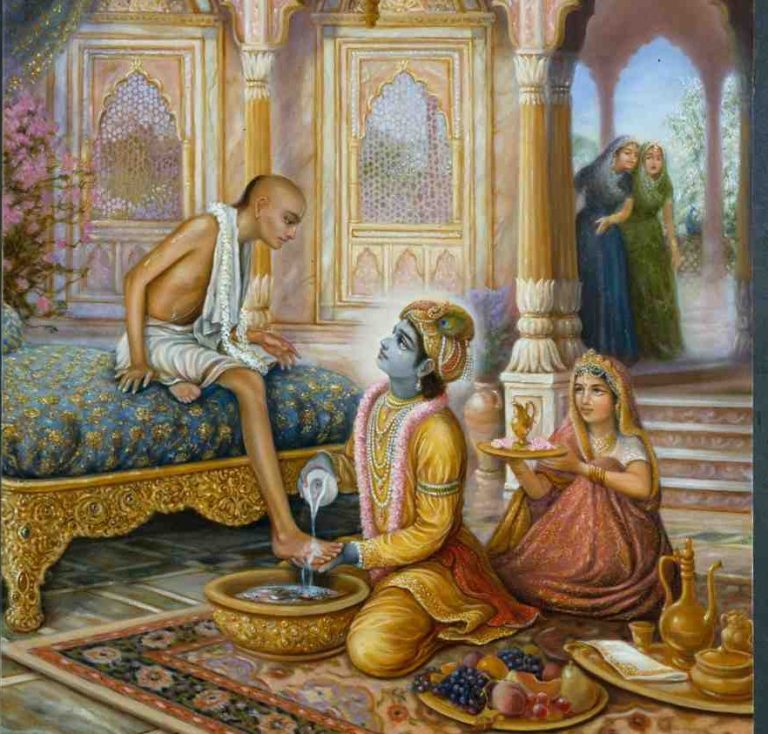 After he poured water into a basin and began to wash the disciples’ feet, and to wipe them with the towel with which he was girded, then comes he to Simon Peter. And Peter says