Deucalion’s Flood was caused by Zeus’s anger against the impious sons of Lycaon, the son of Pelasgus. Lycaon himself first civilized Arcadia and instituted the worship of Zeus.  Lycaeus angered Zeus by sacrificing a boy to him. He was therefore transformed into a wolf, and his house struck by lightning. Lycaon’s sons were, some say, twenty-two in number; but others say fifty.

News of the crimes committed by Lycaon’s sons reached Olympus, and Zeus himself visited them, disguised as a poor traveler.

On his return to Olympus, Zeus in disgust let loose a great flood on the earth, meaning to wipe out the whole race of man; but Deucalion, King of Phthia, warned by his father Prometheus the Titan, whom he had visited in the Caucasus, built an ark, victualled it, and went aboard with his wife Pyrrha, a daughter of Epimetheus. Then the South Wind blew, the rain fell, and the rivers roared down to the sea which, rising with astonishing speed, washed away every city of the coast and plain ; until the entire world was flooded, but for a few mountain peaks, and all mortal creatures seemed to have been lost, except Deucalion and Pyrrha. The ark floated about for nine days until, at last, the waters subsided, and it came to rest on Mount Parnassus or, some tell, on Mount Aetna ; or Mount Athos ; or Mount Othrys in Thessaly. It is said that Deucalion was reassured by a dove which he had sent on an exploratory flight. 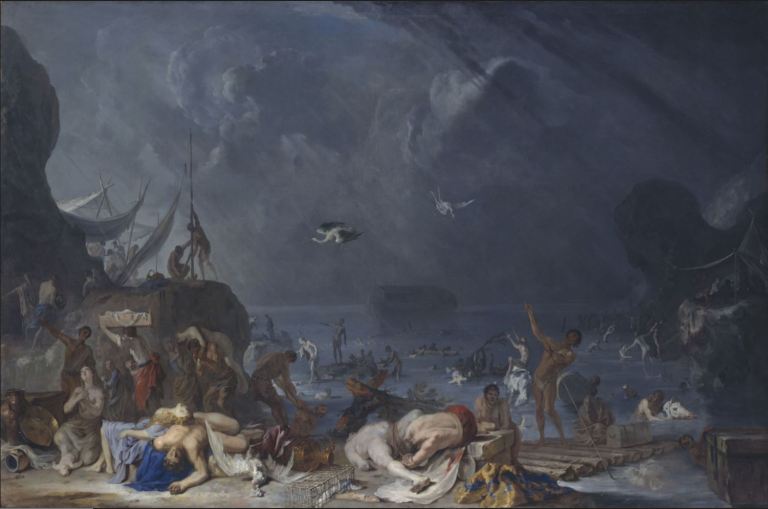 Is it possible that these things from different sources are teaching the same principle from the same teacher? Both speak of themes of being born of spirit and of water. Both potentially lead the mind

Hayagriva succeeded in stealing Rig Veda, Yajur Veda, Sama Veda and Atharva Veda (books of scripture) from Brahmaloka (the abode of God).  Brahma (Father) knew that the people on earth would not be able to