THE great hermit Asita, whose austerities were pleasing to the Gods, heard of the birth of him who was to save mankind from the torment of rebirth. In his thirst for the true law, he came to the palace of King Suddhodana and gravely approached the women’s quarters. His years and his learning lent him great dignity.

The king showed him the courtesies that custom prescribed and addressed him in a seemly manner:

“Happy, indeed, am I! Truly, this child of mine will enjoy distinguished favor, for the venerable Asita has come purposely to see me. Command me. What must I do? I am your disciple, your servant.”

The hermit, his eyes shining with the light of joy, gravely spoke these words:

“This has happened to you, O noble, generous and hospitable king, because you love duty and because you are ever kind to those who are wise and to those who are full of years. This has happened to you because your ancestors, though rich in land and rich in gold, were above all rich in virtue. Know the reason for my coming, O king, and rejoice. In the air I heard a divine voice speaking and it said: ‘A son has been born to the king of the Sakyas, a son who will have the true knowledge.’ I heard these words, and I came, and my eyes shall now behold the glory of the Sakyas.”

Overwhelmed with joy, the king went to fetch the child. Taking him from his nurse’s breast, he showed him to the aged Asita.

The hermit noticed that the king’s son bore the marks of omnipotence. His gaze hovered over the child, and presently his lashes were wet with tears. Then he sighed and turned his eyes to the sky.

The king saw that Asita was weeping, and he began to fear for his son. He questioned the old man:

“You say, O venerable roan, that my son’s body differs little from that of a God. You say that his birth was a wondrous thing, that in the future his glory will be supreme, yet you look at him with eyes that are filled with tears. Is his life, then, to be a fragile thing? Was he born only to bring me sorrow? Must this new branch wither before it has burst into flower? Speak, O saintly man, speak quickly; you know the great love a father bears his son.”

“Be not distressed, O king,” replied the hermit. “What I have told you is true: this child will know great glory. If I weep, it is for myself. My life draws to a close and he is born, he who will destroy the evil of rebirth. He will surrender sovereign power, he will master his passions, he will understand truth, and error will disappear in the world before the light of his knowledge, even as night flees before the spears of the sun. From the sea of evil, from the stinging spray of sickness, from the surge and swell of old age, from the angry waves of death, from these will he rescue the suffering world, and together they will sail away in the great ship of knowledge. He will know where it takes its rise, that swift, wonderful, beneficent river, the river of duty; he will reveal its course, and those who are tortured by thirst will come and drink of its waters. To those tormented by sorrow, to those enslaved by the senses, to those wandering in the forest of existences like travellers who have lost their way, he will point out the road to salvation. To those burning with the fire of passion, he will be the cloud that brings refreshing rain; armed with the true law, he will go to the prison of desires where all creatures languish, and he will break down the evil gates. For he who will have perfect understanding will set the world free. Therefore do not grieve, O king. He alone is to be pitied who will not hear the voice of your son, and that is why I weep, I who, in spite of my austerities, in spite of my meditations, will never know his message and his law. Yes, even he is to be pitied who ascends to the loftiest gardens of the sky.” 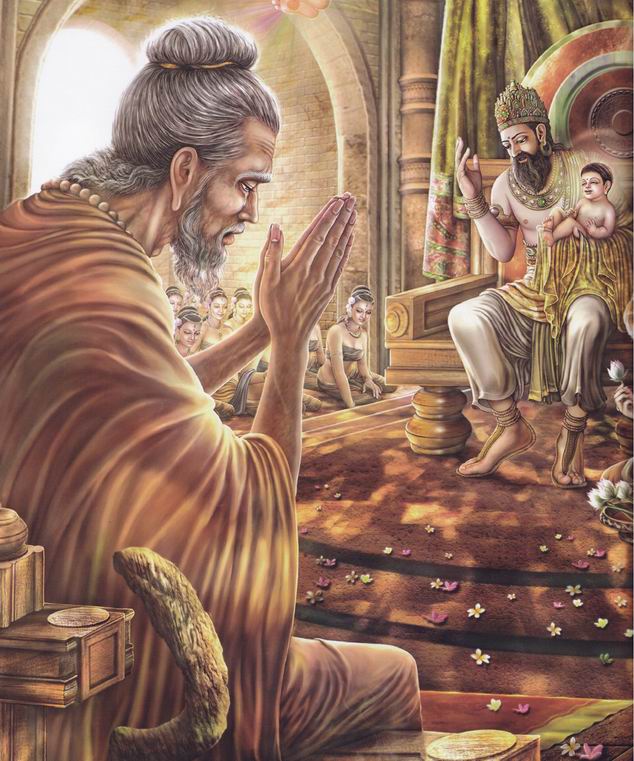