In front of a Japanese shrine, there are two statues of lions known as “komainu” that sit on both sides of the approach. They are not idols but guards for the shrine. This was also a custom of ancient Israel. In God’s temple in Israel and in the palace of Solomon, there were statues or relieves of lions (1 Kings 2:82).

The throne had six steps, and the top of the throne was round behind, and there were armrests on either side on the place of the seat, and two lions stood beside the armrests.

One of the lion dogs has a single horn, similar to that of a unicorn and is always found on the left side.  The other has all the features of a normal lion, albeit stout like a dog.  Interestingly, lions are not indigenous to Japan, yet the obvious lion-like features are very much present in these ancient guardian statues.

It is believed that the Komainu may actually represent Northern and Southern Israel.  Lion is the symbol of the tribe of Judah, and unicorn the symbol of the tribe of Ephraim. The Hata Clan, an immigrant people in Japan since the Kofun period 250-538 AD), have expressed faith that the lion and unicorn will someday be reunited.  Northern Israel, or Ephraim, is represented by the Unicorn and Southern Israel, or Judah, is represented by the Lion. 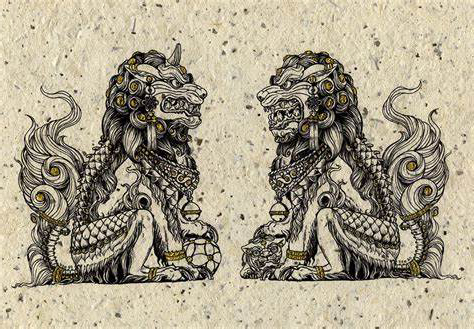