Here is the word for Ark.  As in Noah’s Ark

I am noticing this morning that the word for “length” is pronounced like the English word Ark.

The two words appear next to each other in Genesis 6:

Then the Hebrew word for ark is pronounced similar to the English word Tub.

The word for width/breadth is kind of funny.

The whole word would be pronounced similar to “rachub”.  Since the last two letters are pronounced “chub” it is easier to remember because of the English word “chubby”.

The word for cover is pronounced like the English word except that it would be pronounced with a “ph” sound instead of a “v” sound.

And all the high hills that are under the whole heaven were covered, fifteen cubits and upward did the waters prevail, and the mountains were covered. And all flesh died that moved upon the face of the earth, both of fowl, and of cattle, and of beasts, and of every creeping thing that creeps upon the earth, and every man. All in whose nostrils the Lord had breathed the breath of life, of all that were on the dry land, died. Genesis 5:15

The Hebrew word for ark is “TEVAH“=תבה.  This word appears in two places in the Old Testament.

“And God said unto Noah, The end of all flesh has come before me; for the earth is filled with violence, and behold, I will destroy all flesh from off the earth. Make yourself therefore an ark of gopher wood. ” Genesis 5:15

The second place is in Exodus 1:4 where the baby Moses is placed in an “ark”.

And there went a man of the house of Levi and took to wife a daughter of Levi, and the woman conceived and bore a son. And when she saw that he was a peculiar child, she hid him three months. And when she could no longer hide him, she took for him an ark of papyrus, and smeared it with tar and with pitch, and put the child therein; and she laid it in the reeds by the river’s brink.

Of course, some translations use the word basket instead of ark.  However, the original Hebrew word is “tevah”, which means ark.

And the daughter of Pharaoh came down to wash herself at the river, and her maidens walked along by the river’s side; and when she saw the ark among the reeds, she sent her maid to fetch it. And when she had opened it, she saw the child; and behold, the babe wept. And she had compassion on him and said, This is one of the Hebrews’ children. […] And she called his name Moses, and she said, Because I drew him out of the water.

Notice that in both cases, the ark is the means of preservation which God prepared against destruction, specifically in covering by water.

In Genesis, the earth was covered by water and mankind was destroyed.  But God preserved Noah and his family by placing them in a “Tevah” which allowed them to ride atop the covering of flood waters.  In Exodus, all Israelite male babies were to be killed by being drowned in the Nile.  But God saw to it that Moses would preserved by placing him in a “Tevah”, again to ride atop the water.

You may have asked, but what about the Ark of the Covenant?  Doesn’t that qualify as another usage of the word ark?

In this case, no.  The commandments were placed inside an aron אָרוֹן.  It also means ark, or chest, but the scriptural usage is closer in meaning to the word coffin.

The custom of using coffins is probably borrowed from the Egyptians. It is recorded of Joseph that he was “put in a coffin in Egypt”. Tradition says it was of metal (Soṭah 13a). Both the Ark of the Covenant and the coffin are called, in Hebrew, “aron.” The Talmud says that the “aron” (coffin) of Joseph was carried side by side with the “aron” (Ark) containing the Tables of the Law, so as to express the idea that “the one in this observed what is written upon the other” 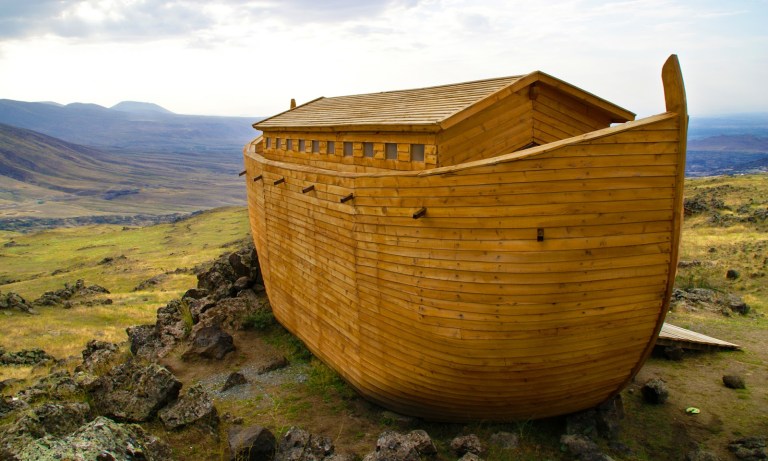 Tav is related to the future. It is a symbol of the end as in Alpha and Omega. It is used with verbs to represent future tense and to represent the word “shall”