According to the Bhagavata Purana immediately after Krishna’s birth Kamsa, the wicked king of Mathura, threatened Krishna’s life. The baby’s adopted father, Vasudeva, secretly took him to the countryside as soon as he was born. His night time escape from the city was during a rainstorm. The swollen Yamumna river threatened their destruction, but the multiheaded serpent Vasuki rose up to shield Vasudeva and the infant son from the downpour. The fatherly protector struggled to cross the swirling torrent, while a roaring tiger offered protection on the opposite bank. After his foster parents, Yasoda and Nanda, raised Krishna, he returned to Mathura and slayed King Kamsa.

“By the influence of Yoga-māyā, all the doorkeepers fell fast asleep, their senses unable to work, and the other inhabitants of the house also fell deeply asleep. When the sun rises, the darkness automatically disappears; similarly, when Vasudeva appeared, the closed doors, which were strongly pinned with iron and locked with iron chains, opened automatically. Since the clouds in the sky were mildly thundering and showering, Ananta-nāga, an expansion of the Supreme Personality of Godhead, followed Vasudeva, beginning from the door, with hoods expanded to protect Vasudeva and the transcendental child.

Because of constant rain sent by the demigod Indra, the river Yamunā was filled with deep water, foaming about with fiercely whirling waves. But as the great Indian Ocean had formerly given way to Lord Rāmacandra by allowing Him to construct a bridge, the river Yamunā gave way to Vasudeva and allowed him to cross. When Vasudeva reached the house of Nanda Mahārāja, he saw that all the cowherd men were fast asleep. Thus he placed his own son on the bed of Yaśodā, picked up her daughter, an expansion of Yoga-māyā, and then returned to his residence, the prison house of Kaṁsa.”

Slaughter of the Innocents

“After that night passed, Kaṁsa summoned his ministers and informed them of all that had been spoken by Yoga-māyā [who had revealed that He who was to slay Kaṁsa had already been born somewhere else].  After hearing their master’s statement, the envious asuras, who were enemies of the demigods and were not very expert in their dealings, advised Kaṁsa as follows.  If this is so, O King of the Bhoja dynasty, beginning today we shall kill all the children born in all the villages, towns and pasturing grounds within the past ten days or slightly more.” 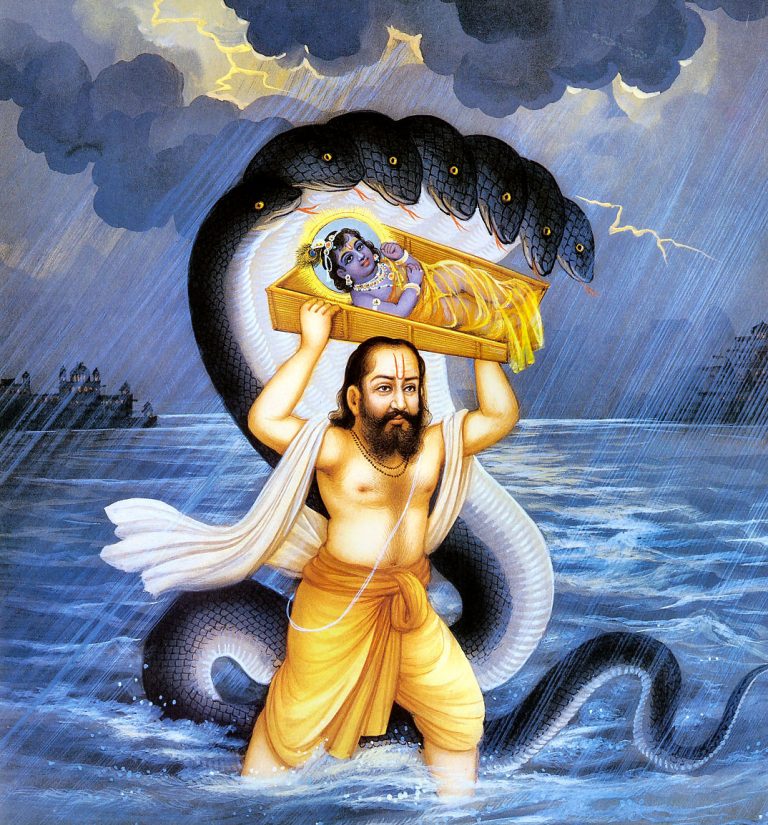 Matthew 1:10-12 And when they had departed, behold, the angel of the Lord appeared to Joseph in a vision, saying, Arise and take the young child and his mother and flee into Egypt, and remain