Viṣṇu (pronounced Vishnu) is among the most important deities of Hinduism. Along with Brahmā (see: Father Ahman) and Śiva (Shiva, self absorbed god of destruction), Vishnu forms the principal trinity of Hindu religious practice.

“Persons who are strongly entrapped by the consciousness of enjoying material life, and who have therefore accepted as their leader or guru a similar blind man attached to external sense objects, cannot understand that the goal of life is to return home, back to Godhead, and engage in the service of Lord Vishnu. As blind men guided by another blind man miss the right path and fall into a ditch, materially attached men led by another materially attached man are bound by the ropes of fruitive labour, which are made of very strong cords, and they continue again and again in materialistic life, suffering the threefold miseries.” Chapter Six, An Unknown Friend

“That Lord Śiva lives as a poor man although his devotees appear very opulent, whereas Lord Kṛṣṇa, or Lord Viṣṇu, is always opulent and yet His devotees appear poverty-stricken, is a situation which appears appears contradictory and puzzling to a discriminating person.” Krsna, the Supreme Personality of  Godhead, Ch 88

In his many forms, Vishnu is regarded as the preserver and protector. Hinduism teaches that when humanity is threatened by chaos or evil, Vishnu will descend into the world in one of his incarnations, or avatars, to restore righteousness.

Also, the example of fire is sometimes given: “As a blazing fire burns everything within a room, Lord Viṣṇu, situated in the heart of the yogī, burns up all kinds of impurities.”

Vishnu has many avatars, or identities, in Hinduism by which he is known.

1. Matsya (the fish) – in advance of the worldwide Flood
2. Kurma (the tortoise)
3. Varaha (The Boar)
4. Narasimha (The Lion Man) – compare Lion of Judah
5 Vamana (The Dwarf)
6 Parashurama (The Lumberjack)
7 Rama (the Perfect Man)
8 Krishna (the Bringer of Light)
9 Buddha
10 Kalki (The Horseman) 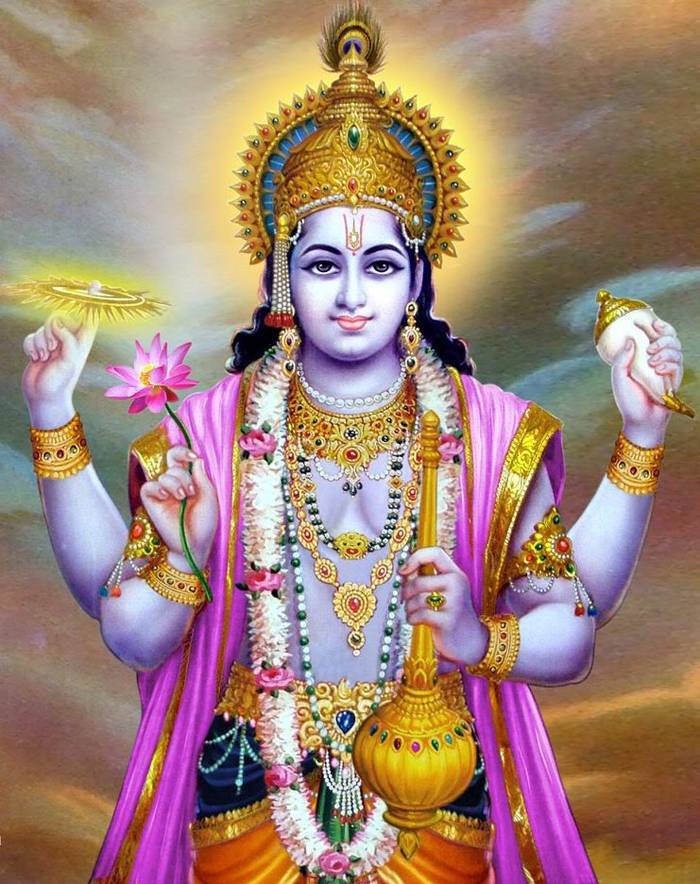