Breathing Life into a Bird

Whenever Mother Mary got a moment to spare she liked to be busy in her garden, watering her flowers and planting out vegetables.  Jesus had always wanted to help her, and as soon as he was big enough to look after it properly, she gave him a little plot for his own.

He made sure his daisies were well watered, and he planted a lot of rose trees because roses were the flowers he loved best.  There were big trees growing in the garden already, and he loved those too.  Some of the trees had flowers, and all of them had birds singing in the branches.  The birds were his friends.

He had another friend.  His mother had a cousin called Elizabeth, and she had a little boy called John, about the same age as Jesus.  Once Auntie Liz came to stay with Mary and Joseph in Nazareth, and she brought John with her, so then Jesus had someone to play with.

The pair of them usually played in the garden.  Jesus showed John his roses and daisies.  John liked to climb the trees, and he was always poking about in the grass beneath them, looking for wild flowers.  One day he found a dead bird in the grass.  He called Jesus to come and look at it.  THe bird was flat on its back, with its legs stretched out stiffly.  Its eyes were shut and its beak was open, but no sounds came out.

Jesus had never before seen a dead bird, and neither had John.  Jesus turned it over with the tip of his finger, but it was quite dead.  John began to cry.

Then Jesus picked it up and laid it on the palm of his hand.  Gently he stroked the ruffled feathers, and he worked his little finger into the hooked claws.  Very carefully he opened the eyes.  The beak was already open.  He opened it wider, and placing his mouth around it, he breathed into it.  Then he caressed the limp little body with his cheek.

‘Why do you do all that?’ asked John.  ‘It is dead.’
‘Because I love it’, Jesus replied.
And then the bird began to stir itself.  It blinked its eye and drew in its feet; it nodded its head, spread its wings and flew away.

John took Jesus’ hand – the hand the held the bird – and pressed it.  He wanted to say ‘Thank you.’ But what he said was rather different: ‘Thank God!’

Source: Legends of the Christ child

1. This little child Jesus when he was five years old was playing at the ford of a brook: and he gathered together the waters that flowed there into pools, and made them straightway clean, and commanded them by his word alone.
2. And having made soft clay, he fashioned thereof twelve sparrows. And it was the Sabbath when he did these things (or made them). And there were also many other little children playing with him.
3. And a certain Jew when he saw what Jesus did, playing upon the Sabbath day, departed straightway and told his father Joseph: Lo, thy child is at the brook, and he hath taken clay and fashioned twelve little birds, and hath polluted the Sabbath day.
4.  And Joseph came to the place and saw: and cried out to him, saying: Wherefore doest thou these things on the Sabbath, which it is not lawful to do? But Jesus clapped his hands together and cried out to the sparrows and said to them: Go! and the sparrows took their flight and went away chirping.
5.  And when the Jews saw it they were amazed, and departed and told their chief men that which they had seen Jesus do.

And (make him) a Messenger to (the) Children (of) Israel, “Indeed, I [surely] [I] (have) come (to) you with a sign from your Lord that I [I] design for you from [the] clay like the form (of) the bird, then I breath into it and it becomes a bird by (the) permission (of) Allah. And I cure the blind, and the leper, and I give life (to) the dead by (the) permission (of) Allah. And I inform you of what you eat and what you store in your houses. Indeed, in that (is) surely a sign for you, if you are believers. 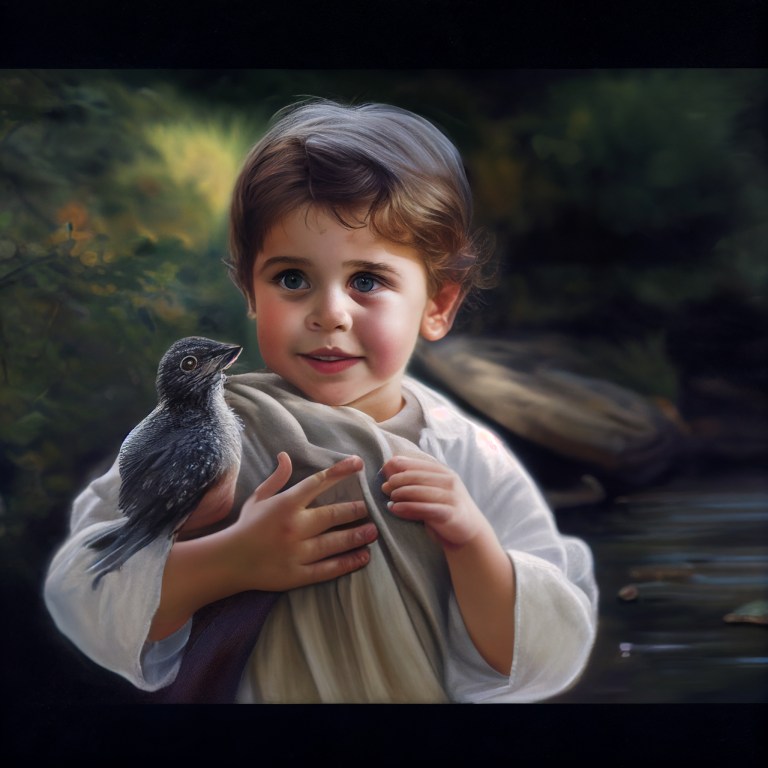 The time came to take Siddhartha to the temple of the Gods. By the king’s command, the streets of the city and the public squares were superbly decorated; drums were sounded and bells joyously rung.

About My Father’s Business

And it came to pass after three days they found him in the temple, sitting in the midst of the doctors, and they were hearing him and asking him questions. and all who heard