She was very beautiful. It was as if the Goddess Lakshmi herself had strayed into the world. When she spoke, it was like the song of birds in the spring, and her words were sweet and pleasant. Her hair was the color of the black bee; her forehead was as chaste as a diamond; her eyes as cool as a young blue-lotus leaf; and no frown ever marred the exquisite curve of her brows.

She was virtuous. She desired the happiness of her subjects; she was attentive to the pious precepts of her teachers. She was truthful, and her conduct was exemplary.

One day, the queen bathed and perfumed her body, then attired herself in a delicate, colorful robe and covered her arms with jewels. Golden bangles tinkled about her ankles, and her face was radiant with happiness as she sought the king’s presence.

Suddhodana was seated in a great hall. Sweet music was lulling his tranquil reverie. Maya took the seat on his right, and she said to him:

“Deign to listen, my lord. Deign to grant the favor I have to ask of you, O protector of the earth.”

“Speak, my queen,” replied Suddhodana. “What is this favor?”

“My lord, there is great suffering in the world, and I look with compassion on all who suffer. I would be helpful to my fellow-creatures; I would close my mind to evil thoughts. And since I shall forbear doing and thinking evil, since I am thus kind to myself, I would be helpful, I would be kind to others, too. I will put aside pride, O king, and I will not listen to the voice of evil desire. I will never utter a vain or dishonorable word. My lord, henceforth I will lead a life of austerity; I will fast; and I will never bear ill will or commit wickedness, suffer anxiety or hatred, know anger or covetousness. I will be satisfied with my lot; I will forswear deceit and envy; I will be pure; I will walk in the straight path; and I will practise virtue. And because of these things my eyes are now smiling, because of these things my lips are now joyous.”

She paused a moment. The king gazed at her in tender admiration. She continued:

“My lord, I ask you to respect my austere life. Do not enter the dim forest of desire; allow me to observe the holy law of abstinence. I shall repair to those apartments that are in the lofty reached of the palace, and there, where the swans build their nests, have prepared for me a couch strewn with flowers, a soft, perfumed couch. My maidens shall attend to my wants, and you may dismiss the eunuchs, the guards and all vulgar servants. I would be spared the sight of ugliness, the sound of revelry and the odor of things unpleasant.”

She said no more. The king replied:

“So let it be! The favor you ask, I grant.” And he commanded:

“Up there, in the lofty reaches of the palace, where the air throbs with the song of the swans, let the queen, resplendent in gold and precious stones, rest on a couch of rare flowers; and let there be music. And to her maidens, gathered about her, she will be like a daughter of the Gods in some celestial garden!”

“It is well, my lord,” said she. “But hear me further. Free your prisoners. Give generously to the poor. Let men and women and children be happy! Be merciful, O king, and, that the world may be joyous, be a father to all living creatures!” 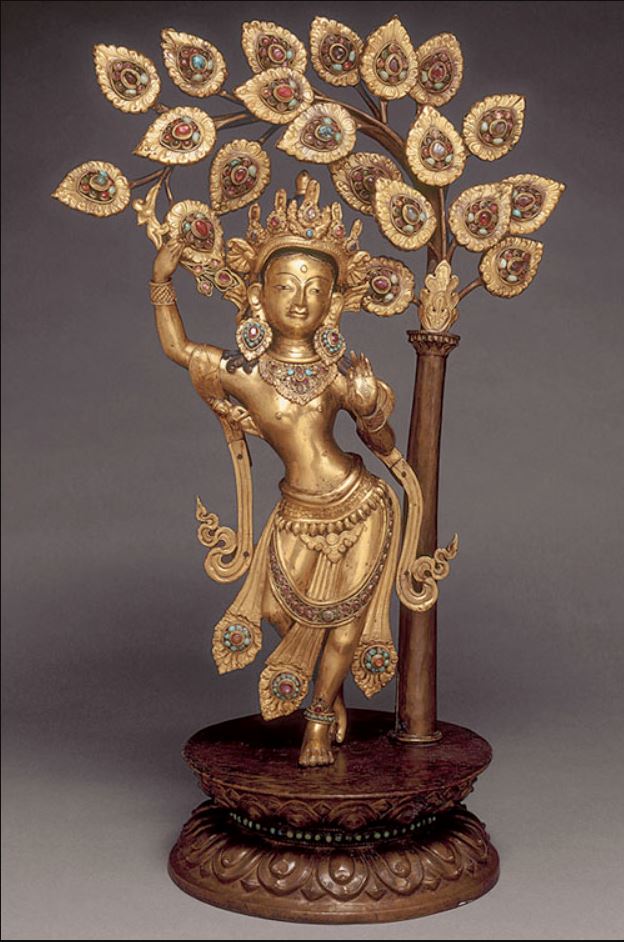 Devaki conceived Krsna by divine conception as the child was transferred into her womb by mind to mind transference. Krishna was the 8th child of Devaki and also the 8th avatar of Vishnu. From Śrīmad-Bhāgavatam

While a great deal more could be said to demonstrate that God the Father necessarily includes God the Mother, we want to know more than merely She exists. We want to understand her character, perfections

What Desireth Thou? What Beholdest Thou?

And it came to pass that the spirit said unto me, Look. And I looked and beheld a tree, and it was like unto the tree which my father had seen; and the beauty thereof