Receiving a command from the other gods to solidify and shape the Earth (which then “[resembled] floating oil and [drifted] like a jellyfish”), the couple Izanagi [His Augustness the Male Who-Invites] (see Adam) and Izanami [Her Augustness the Female-Who-Invites] (see Eve) use a jewelled spear to churn the watery chaos. The brine that dripped from the tip of the spear congealed and turned into an island named Onogoro (淤能碁呂島).
Source: Section III.—The Island of Onogoro

The two descended to the island and, setting up their dwelling, erected a ‘heavenly pillar’ (ame no mihashira) on it. Izanagi and Izanami, realizing that they were meant to procreate and have children, then devised a marriage ceremony whereby they would walk in opposite directions around the pillar, greet each other and initiate intercourse. The two then proceeded to beget the various deities who are to inhabit these lands.

“Thereupon Izanagi, wishing to meet and see his younger sister Izanami, followed after her to the Land of Hades.  So when from the palace she raised the door and came out to meet him,  Izanami spoke, saying: “Thine Augustness my lovely younger sister! the lands that I and thou made are not yet finished making; so come back!” Then Her Augustness the Female-Who-Invites answered, saying: “Lamentable indeed that thou earnest not sooner! I have eaten of the furnace of Hades.  Nevertheless, as I reverence  the entry here of Thine Augustness my lovely elder brother, I wish to return.  Moreover  I will discuss it particularly with the Deities of Hades.  Look not at me!”
Source: SECT. IX.—THE LAND OF HADES

Izanagi, feeling contaminated by his visit to Yomi, went to “the plain of Awagihara (i.e. a plain covered with awagi) by the river-mouth of Tachibana in Himuka in the island of Tsukushi” and purified himself by bathing in the river; various deities came into existence as he stripped off his clothes and accouterments and immersed himself in the water (see baptism).
Source: SECT. X.—THE PURIFICATION OF THE AUGUST PERSON 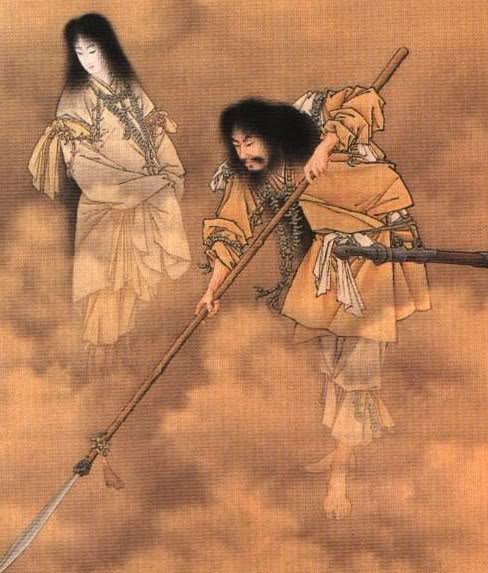 Eve, Mother of All Living

“And I, the Lord God, said unto my Only Begotten that it was not good that the man should be alone; wherefore, I will make a help meet for him. […] And I, the Lord