Traditional marriage in Nigeria among Yoruba

Yoruba is one of the biggest ethnic groups in Nigeria. The Yorubaland consists of such states as Osun, Ondo, Ekiti, Oyo State, Lagos State. Yoruba traditional marriage is a unique ceremony with rites, bridal list, and other requirements.

The task of Alarina is to find out all the information about the potential bride. He or she finds information about the reputation of the girl, about her family, maybe about any illness. If the Alarina doesn’t find any bad information, the Yoruba traditional marriage process continues. The Alarina also acts as middleman between the intending couple. Marriage is an essential institution in the Yoruba culture and history.  Yoruba tribe is one of the three major tribes in Nigeria.  Their wedding ceremony have always been colorful and very festive.  Families and friends are dressed in their brightest and best attires.

Yoruba man usually purse his traditional Yoruba woman by direct approach or by approaching member of the bride’s family or any other way they deemed fit.  Once they agreed that they love each other and will like to take the relationship to the next stage, they will both inform their parents.  The consent of the bride’s family is important and the groom and his family are usually happy to have that consent.  Yoruba traditional marriage entails two stages which are introduction and engagement.
The introductory stage entails the groom family introducing themselves to the bride’s family and making their intension known that they wants their daughter’s hand in marriage to their son.  This is usually done through an intermediary called Olopa Iduor (appointed speaker for the groom side) and Olopa Ijoko (appointed speaker for the bride side).

The ceremony takes place in the bride’s house and they are responsible for all the preparations and costs.  Before the groom’s family enters the bride’s home, they kneel to show the bride’s family respect.  Promptness to the bride’s house is of utmost importance.  If the groom is not punctual, the family may be asked to leave or may be asked to pay a fee.  The Olopa Iduor and Olopa Ijoko sit at the middle while the two families sits at the opposite side of each other.  Once everyone is introduced, a proposal letter is presented to the bride’s family by Olopa Iduor who reads it aloud and in return, an acceptance letter is given to the groom’s family by Olopa Ijoko and a date is fixed for the engagement ceremony.

The engagement ceremony is also held at the bride’s house.  During the engagement ceremony, the groom’s family are expected to bring the items listed in the marriage list given to them by the bride’s family.  Items listed in the bride’s letter depends on each family but usually include such things as yam, goat, box of clothes, salt fish drink, wine, rings and other items deemed necessary.  Some Yoruba culture accepts dowries at the engagement ceremony.  Dowry payment may be in form of goods but consists of money most of the time.  Reason for dowry payment is to test the patience and endurance of the groom and compensation of the bride’s family for raising her.  The bride and groom exchange rings and vows and are pronounced husband and wife thereafter.

The next step is called Momi N Mo, this is the meeting of the families. This is kind of introduction ceremony, at this ceremony, the family of bride provides so-called Eru Iyawo – Yoruba bridal list. Bridal list consists of special items:

42 Orogbo – Bitter kolas
42 Isu – Tubers of yam
42 Obi abata -Kolanuts
42 Atare – Chilli/Alligator Peppers
42 Eja Osan – pieces of dried Fish
1 Aadun – Dish of peppered corn
1 Pack of Sugar
2 Baskets of Fruit
2 Decanters filled with honey
2 Bottles of non alcoholic wine
4 Crates of canned or bottled soft drinks
4 Crates malt soft drinks
4 Cartons of bottled water
2 Cartons of fruit juice
1 Bag of salt
1 Bag of rice
1 Umbrella
1 Goat
1 Keg of palm wine
1 Keg of groundnut oil
1 A suitcase with shoes, and clothes.
1 pair of Earrings, Wristwatch, and Chains
Biscuits and Sweets
Rings for groom and bride
Bible (for Christians) and Quran (for Muslims)
As for the fees of the ceremony, there are such requirements

The next step of Yoruba traditional marriage ceremony is the engagement. All the process is conducted by Alaga Ijoko and Alaga Iduro, they are invited to be moderators of the ceremony. These two people play important roles in the ceremony.

Alaga Ijoko properly coordinate all the process of the traditional wedding, he or she keeps all the fees and conduct all the steps of the wedding. Alaga iduro – a standing master of ceremony, a custodian of wedding tradition.
Bride’s Outfit: Tradition outfit consists of gele – head tie, the blouse (buba), and an iro, it is a big material tied around her waist. Usually, the bride’s look adorned with accessories like bangles, beads, gold earrings and necklace.
Groom’s Outfit: Usually he wears Agbada. The colors of groom’s and bride’s clothes must be the same.

As we see the traditional wedding in Yoruba tribe is a process that is conducted with active participation of families. The authority of parents plays a decisive role during whole process. The ceremony is bright and active. 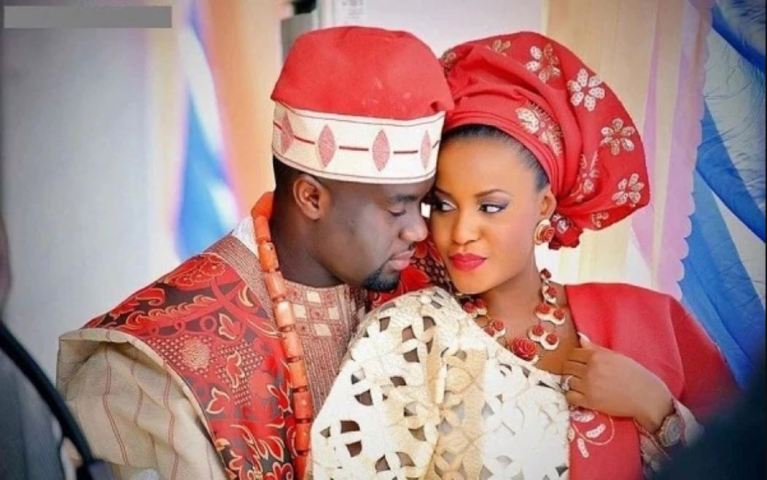 Marriage & the Exaltation of Man & Woman

Marriage was established at the beginning as a covenant by the word and authority of God, between the woman and God, the man and woman, and the man and God. It was ordained by my