Kuntī thanked the Lord within herself. As she watched Karṇa leave the arena her mind went back to the day of his birth. She had only wanted to test Durvāsā’s boon. She had no idea the mantra would prove so powerful. Kuntī remembered how she had been lying on her couch watching the brilliant sun rise over the Ganges. What if she could call the sun-god to her? The mantra had come to mind and almost at once the blazing Sūrya was standing before her. Kuntī had been amazed, then horrified when he told her that he could not leave without giving her a child. “I am yet a maiden,” she protested. “What will everyone say?” Sūrya smiled. By his power she would conceive a son and still remain a maiden.

And so it had happened. The god left and in due course the boy was born. Kuntī had marvelled at the baby’s natural golden armor and earrings, the same armor and earrings she had seen on Karṇa as he marched into the arena. She recalled how that armor had shone in the morning sun as the boy floated away in his basket on the river. Kuntī wept again as she recalled how she could not tell anyone she had given birth and how, blinded by tears, she had pushed the baby out into the flowing river. Adhiratha must have found the basket and raised her son. As Karṇa strode off with Duryodhana, Kuntī led Gāndhārī back to the palace. 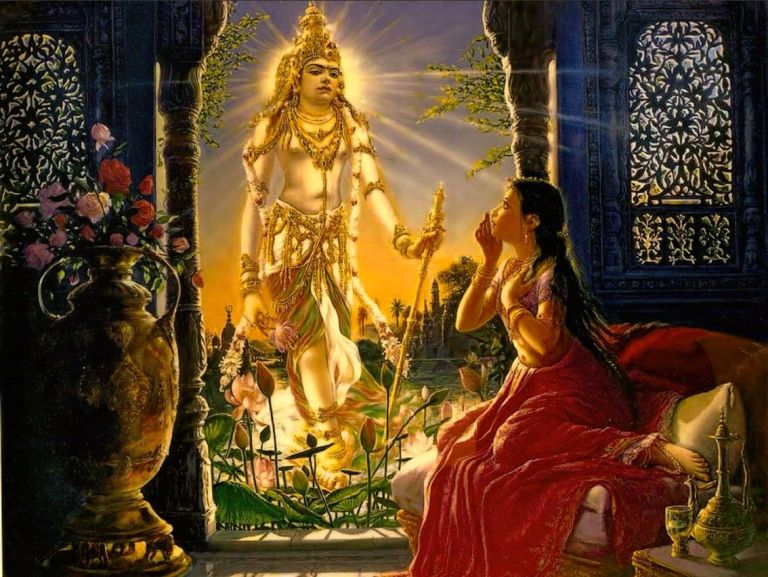