My name is Banyacya of the Wolf, Fox and Coyote Clan and I am a member of the Hopi sovereign nation. Hopi in our language means a peaceful, kind, gentle, truthful people. The traditional Hopi follows the spiritual path that was given to us by Massau’u the Great Spirit. We made a sacred covenant to follow his life plan at all times, which includes the responsibility of taking care of this land and life for his divine purpose. We have never made treaties with any foreign nation, including the United States, but for many centuries we have honored this sacred agreement. Our goals are not to gain political control, monetary wealth nor military power, but rather to pray and to promote the welfare of all living beings and to preserve the world in a natural way. We still have our ancient sacred stone tablets and spiritual religious societies which are the foundations of the Hopi way of life. Our history says our white brother should have retained those same sacred objects and spiritual foundations.

In 1948, all traditional Hopi spiritual leaders met and spoke of things I felt strongly were of great importance to all people. They selected four interpreters to carry their message of which I am the only one still living today. At the time, I was given a sacred prayer feather by the spiritual leaders. I made a commitment to carry the Hopi message of peace and deliver warnings from prophesies known since the time the previous world was destroyed by flood and our ancestors came to this land.

My mission was to open the doors of this Great House of Mica to native peoples. The Elders said to knock four times and this commitment was fulfilled when I delivered a letter and the sacred prayer feather I had been given to John Washburn in the Secretary General’s office in October, 1991. I am bringing part of the Hopi message to you here today. We have only ten minutes to speak and time is late so I am making my statement short.

At the meeting in 1948, Hopi leaders 80, 90 and even 100 years old explained that the creator made the first world in perfect balance where humans spoke one language, but humans turned away from moral and spiritual principles. They misused their spiritual powers for selfish purposes. They did not follow nature’s rules. Eventually the world was destroyed by sinking of land and separation of land by what you would call major earthquakes. Many died and only a small handful survived.

Then this handful of peaceful people came into the second world. They repeated their mistakes and the world was destroyed by freezing which you call the great Ice Age.

The few survivors entered the third world. That world lasted a long time and as in previous worlds, the people spoke one language. The people invented many machines and conveniences of high technology, some of which have not yet been seen in this age. They even had spiritual powers that they used for good. They gradually turned away from natural laws and pursued only material things and finally only gambled while they ridiculed spiritual principles. No one stopped them from this course and the world was destroyed by the great flood that many nations still recall in their ancient history or in their religions.

The Elders said again only small groups escaped and came to this fourth world where we now live. Our world is in terrible shape again even though the Great Spirit gave us different languages and sent us to four corners of the world and told us to take care the the Earth and all that is in it.

This Hopi ceremonial rattle represents Mother Earth. The line running around it is a time line and indicates that we are in the final days of the prophecy. What have you, as individuals, as nations and as the world body been doing to to take care of this Earth? In the Earth today, humans poison their own food, water and air with pollution. Many of us, including children, are left to starve. Many wars are still being fought. Greed and concern for material things is a common disease.

In this western hemisphere, our homeland, many original native people are landless, homeless, starving and have no medical help.

The Hopi knew humans would develop many powerful technologies that would be abused. In this century, we have seen the First World War and the Second World War in which the predicted gourd of ashes, which you call the atomic bomb, fell from the sky with great destruction. Many thousands of people were destroyed in Hiroshima and Nagasaki.

For many years there has been great fear and danger of World War Three. The Hopi believe the Persian Gulf War was the beginning of World War Three but it was stopped and the worst weapons of destruction were not used. This is now a time to weigh the choices for our future. We do have a choice. If you, the nations of this Earth, create another great war, the Hopi believe we humans will burn ourselves to death with ashes. That’s why the spiritual Elders stress strongly that the United Nations fully open the door for native spiritual leaders as soon as possible.

Nature itself does not speak with a voice that we can easily understand. Neither can the animals and birds we are threatening with extinction talk to us. Who in this world can speak for nature and the spiritual energy that creates and flows through all life? In every continent are human beings who are like you but who have not separated themselves from the land and from nature. It is through their voice that Nature can speak to us. You have heard those voices and many messages from the four corners of the world today. I have studied comparative religion and I think in your own nations and cultures you have knowledge of the consequences of living out of balance with nature and spirit. The native peoples of the world have seen and spoken to you about the destruction of their lives and homelands, the ruination of nature and the desecration of their sacred sites. It is time the United Nations used its rules to investigate these occurrences and stop them now.

The Four Corners area of the Hopi is bordered by four sacred mountains. The spiritual center within is a sacred site our prophecies say will have special purpose in the future for mankind to survive and now should be left in its natural state. All nations must protect this spiritual center.

The Hopi and all original native people hold the land in balance by prayer, fasting and performing ceremonies. Our spiritual Elders still hold the land in the Western Hemisphere in balance for all living beings, including humans. No one should be relocated from their sacred homelands in this Western Hemisphere or anywhere in the world. Acts of forced relocation, such as Public Law 93-531 in the United States, must be repealed.

The United Nations stands on our native homeland. The United Nations talks about human rights, equality and justice and yet the native people have never had a real opportunity to speak to this assembly since its establishment until today. It should be the mission of your nations and this assembly to use your power and rules to examine and work to cure the damage people have done to this Earth and to each other. Hopi Elders know that was your mission and they wait to see whether you will act on it now.

Nature, the First People and the spirit of our ancestors are giving you loud warnings. Today, December 10, 1992, you see increasing floods, more damaging hurricanes, hail storms, climate changes and earthquakes as our prophesies said would come. Even animals and birds are warning us with strange change in their behavior such as the beaching of whales. Why do animals act like they know about the earth’s problems and most humans act like they know nothing? If we humans do not wake up to the warnings, the great purification will come to destroy this world just as the previous worlds were destroyed.

This rock drawing shows part of the Hopi prophecy. There are two paths. The first with technology but separate from natural and spiritual law leads to these jagged lines representing chaos. The lower path is one that remains in harmony with natural law. Here we see a line that represents a choice like a bridge joining the paths. If we return to spiritual harmony and live from our hearts, we can experience a paradise in this world. If we continue only on this upper path, we will come to destruction. 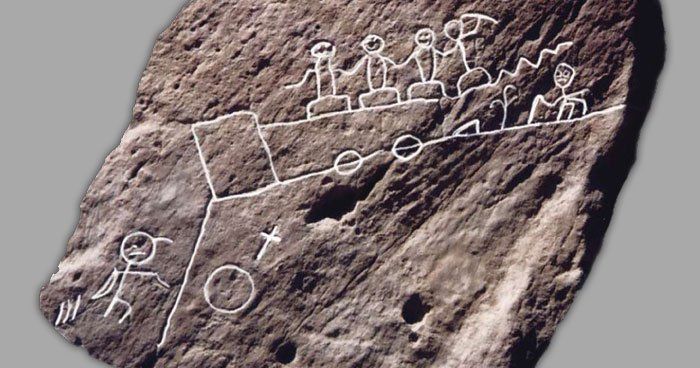 Its up to all of us, as children of Mother Earth, to clean up this mess before it’s too late.

The Elders request that during this International Year for the Worlds Indigenous Peoples, the United Nations keep that door open for spiritual leaders from the four corners of the world to come to speak to you for more than a few minutes as soon as possible. The Elders also request that eight investigative teams visit the native areas of the world to observe and tell the truth about what is being done and stop these nations from moving in this self- destructive direction.

If any of you leaders want to learn more about the spiritual vision and power of the Elders, I invite you to come out to Hopiland and sit down with our real spiritual leaders in their sacred Kivas where they will reveal the ancient secrets of survival and balance.

I hope that all members of this assembly that know the spiritual way will not just talk about it, but in order to have real peace and harmony, will follow what it says across the United Nations wall: “They will beat their swords into plowshares and study war no more.” Lets, together, do that now!

The night before the presentations of the native people from around the world to the General Assembly, there was a total eclipse of the moon over New York City and the sky was clear. The evening after the presentation by Mr Banyacya and the other native spokespersons, heavy rain and strong wind began. The weathermen had been calling for a snowstorm but what came the following day were the worst floods in New York’s memory. Major highways were washed away by the sea and the United Nations itself experienced flooding of its lower subfloors, forcing a shutdown of its heating and air conditioning and all personnel were dismissed at three o’clock.

In the ground floor meeting room, where on December 11, native peoples were meeting representatives of various UN agencies, Thomas Banyacya spontaneously called on all the participants, including UN officials, to form a great circle. All the Elders were in the center and Thomas called in some non-native people as well. Each silently said a prayer. The forming of the circle of unity of all people from the four corners of the Earth was more than just a symbolic act. One participant said she had never felt herself to be in such a safe place. Later, several people present noted that no further storm damage occurred in Manhattan and that the storm itself abated that afternoon. 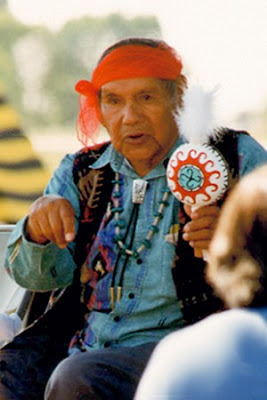