Isis, Healing in her Wings

Isis is the wife of Osiris (Horus) who died and was resurrected. According to some texts, she and her sister Nephthys (see Martha) must also protect Osiris’s body from further desecration by the enemy Set or his servants.  Isis is the epitome of a mourning widow. The hieroglyphic writing of her name incorporates the sign for a throne, which Isis also wears on her head as a sign of her identity. The symbol serves as a phonogram, spelling the st sounds in her name, but it also represented a link with actual thrones and kingship.

Isis’s love and grief for her husband helps restore him to life, as does her recitation of magical spells. In some texts, Isis travels among humans and must seek their help. According to one such story, seven minor scorpion deities travel with and guard her.

Temple reliefs from that time on show the king nursing at Isis’s breast; her milk not only healed her child, but symbolized his divine right to rule. Royal ideology increasingly emphasized the importance of queens as earthly counterparts of the goddesses who served as wives to the king and mothers to his heirs.

In Ancient Egyptian art, Isis was most commonly depicted as a woman with the typical attributes of a goddess: a sheath dress, a staff of papyrus in one hand, and an ankh sign in the other. Her original headdress was the throne sign used in writing her name. She and Nephthys often appear together, particularly when mourning Osiris’s death, supporting him on his throne, or protecting the sarcophagi of the dead. In these situations their arms are often flung across their faces, in a gesture of mourning, or outstretched around Osiris or the deceased as a sign of their protective role.  In these circumstances they were often depicted with the wings of kites.

Despite her significance in the resurrection of Osiris, Isis was originally a minor deity in the ideology surrounding the living king. She played only a small role, for instance, in the Dramatic Ramesseum Papyrus, the script for royal rituals performed in the reign of Senusret I in the Middle Kingdom. Her importance grew during the New Kingdom, when she was increasingly connected with Hathor and the human queen. 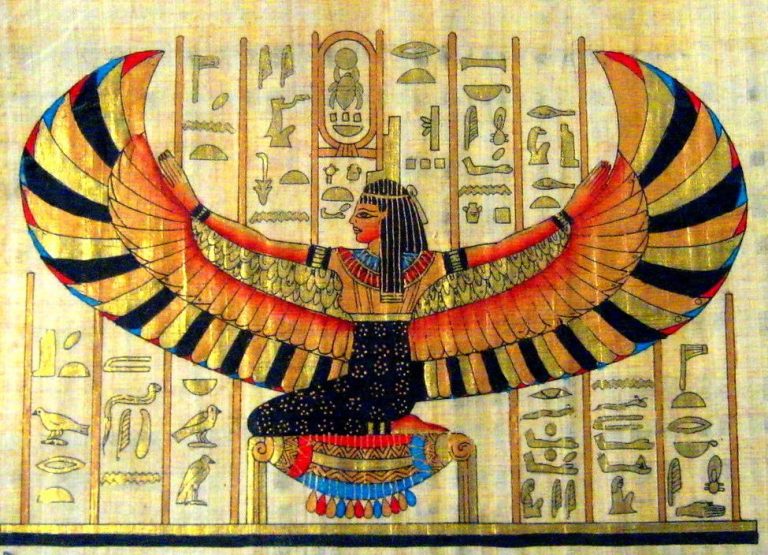 When I saw His resurrection, I was surprised to see it was still dark. When Mary realized it was Jesus, she embraced Him joyfully. She did not timidly reach out her hand, but she readily