Manu and the Seven Sages

“Along the ocean in that stately ship was borne the lord of men, and through
Its dancing, tumbling billows, and its roaring waters; and the bark,
Tossed to and fro by violent winds, reeled on the surface of the deep,
Staggering and trembling like a drunken woman. Land was seen no more,
Nor far horizon, nor the space between; for everywhere around
Spread the wild waste of waters, reeking atmosphere, and boundless sky.
And now when all the world was deluged, nought appeared above the waves
But Manu and the seven sages, and the fish that drew the bark.
Unwearied, thus for years on years the fish propelled the ship across
The heaped-up waters, till at length it bore the vessel to the peak
Of Himavān; then softly smiling, thus the fish addressed the sage:
‘Haste, now, to bind thy ship to this high crag. Know me, the lord of all,
The great Creator Brahmā, mightier than all might, omnipotent.
By me, in fishlike shape, hast thou been saved in dire emergency.
From Manu all creation, gods, asuras, men, must be produced;
By him all the world must be created—that which moves and moveth not.'”

There lived in ancient time a holy man
Called Manu, who, by penances and prayers,
Had won the favour of the lord of heaven.
One day they brought him water for ablution;

Then, as he washed his hands,. a little fish
Appeared, and spoke in human accents thus:
‘Take care of me, and I will be thy saviour.’
‘From what wilt thou preserve me?’ Manu asked.
The fish replied, ‘A flood will sweep away
All creatures; I will rescue thee from that.’

‘But how shall I preserve thee?’ Manu said.
The fish rejoined, ‘So long as we are small,
We are in constant danger of destruction,
For fish eat fish; so keep me in a jar.

‘In such and such a year the flood will come;
Therefore construct a ship, and pay me homage.
When the flood rises, enter thou the ship,
And I will rescue thee.’ So Manu did As he was ordered, and preserved the fish,
Then carried it in safety to the ocean;
And in the very year the fish enjoined
He built a ship, and paid the fish respect,
And there took refuge when the flood arose.
Soon near him swam the fish, and to its horn
Manu made fast the cable of his vessel.
Thus drawn along the waters, Manu passed
Beyond the northern mountain. Then the fish,
Addressing Manu, said, ‘I have preserved thee,
Quickly attach the ship to yonder tree;
But, lest the waters sink from under thee,
As fast as they subside, so fast shalt thou
Descend the mountain gently after them.’
Thus he descended front the northern mountain.
The flood had swept away all living creatures;
Manu alone was left. 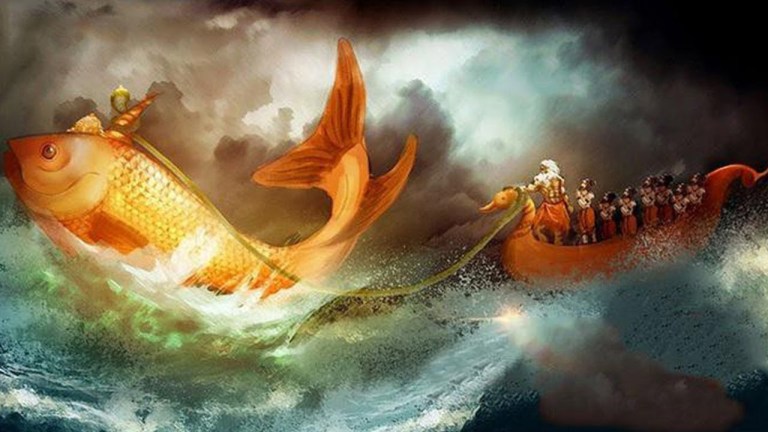 When it was the night on which God honoured him with his mission and showed mercy on His servants thereby, Gabriel brought him the command of God. “He came to me,” said the apostle of

“The New Testament account begins with a lone, obscure priest, cycling through his duties at the Temple, and to his surprise, encountering a vision of the Lord’s angel, Gabriel. It wasn’t Annas, nor Caiaphus, nor