Obatala, King of the White Cloth

Olodumare the god of the sky sent his two sons, Obatala and Oduduwa, down to this world with three things: a bag, a hen and a chameleon. At that time there was no land, only water, so the two brothers had nowhere to stand. Olodumare therefore dropped a tree from the sky, a coconut palm which grew so fast that it was already a high tree by the time Obatala and Oduduwa reached Earth. They landed safely in its branches.

OBATALA (OBTALA, OLUFON, King of the White Cloth) Yoruba (Nigeria) In some accounts the second in command in the Yoruba PANTHEON of deities (known as the OR/SA). As the deputy of the SUPREME BEING, OLORUN, Obatala was Olorun’s representative on Earth. In some accounts, Obatala was regarded as the founder of the first Yoruba city, Ife. In the YORUBA CREATION ACCOUNT, Obatala created land, vegetation, and humans. (See also HUMANS, ORIGIN OF.) According to the Yoruba, in the beginning Earth was just a vast expanse of water and marshes. Obatala suggested to Olorun that Earth would be improved if there were solid land on which orisas and other forms of life could live. Olorun agreed, so Obatala said that he would undertake the task. He went to ORUNMILA, the god of divination, who could divine the best way to proceed with any undertaking, and asked him how to begin. Following Orunmila’s instructions, Obatala descended to Earth on a golden chain and poured sand on the waters. He then placed a hen and a pigeon on the sand. The birds scratched at the sand, scattering it in all directions. Where the sand fell, the waters turned into dry land. Obatala stepped down onto the land, which he named Ife. He planted a palm tree that created many more palm trees. When Olorun sent his servant, the CHAMELEON AGEMO, to Earth to ask how Obatala was doing, Obatala said that things would be improved with more light. So Olorun created the SUN.

After a while, Obatala decided that things would be better if there were people on Earth. He shaped human figures out of clay and called on Olorun to breathe life into them. However, while Obatala was forming the humans, he had become thirsty and had drunk too much palm wine (the TRICKSTER ESHU was said to have tempted him with the wine).  Obatala’s drunkenness caused him to misshape some of the figures. When Obatala sobered up, he saw that some of his creations had twisted limbs, hunched backs, and other deformities. He was filled with remorse and resolved to be the special protector of all humans with disabilities. Obatala then gave people the tools they needed for life, and humanity flourished and grew. Obatala ruled Ife for many years. Eventually he became homesick, ascended the golden chain, and returned to the SKY. 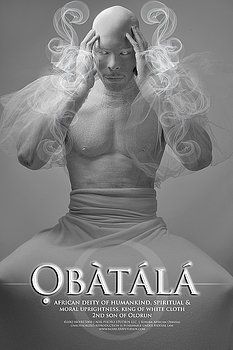 According to the Buddha Carita, or the Life of Buddha, Siddhartha was conceived by the virgin wife of King Suddhodana through an immaculate conception where his mother Maya dreamt of a young elephant carrying a